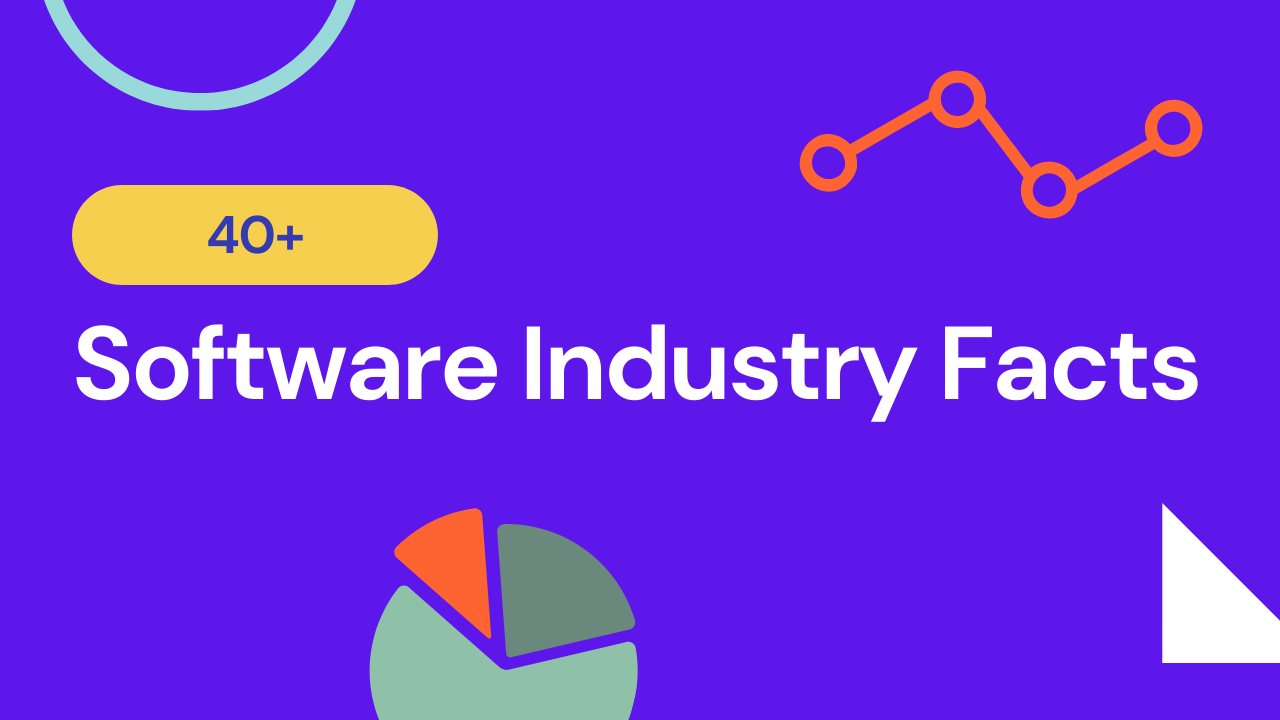 The software industry is wide and vast, and can easily be described by this Statista definition:

“The software industry consists of the development, distribution, and maintenance of software. It can be broadly divided into application software, system infrastructure software, software-as-a-service (SaaS), operating systems, database and analytics software.”

This “broadly divided” industry, however, is boiled down even further into sectors like artificial intelligence, programming, engineering, data – you get the point. That’s why staying up to date on the latest industry and market facts is crucial to understanding the field.

If you’re ready to see how the industry’s been fairing, then keep reading for over 40 software industry statistics. We’ll cover a few useful facts, then move on to how the current market looks, industry-leading companies, job-related stats, diversity and inclusion stats, and current salary trends.

As we learned above, the software industry is anything but simple, encompassing a wide variety of sectors within itself.

Because of this, there’s actually an impressive amount of data showing the software industry influences fields far outside the realm of technology. Software also carries a long history dating back centuries and breaks stereotypical gender norms way before its time.

Overall, these conjoining factors help paint the picture of the modern-day software industry and what you can expect moving forward.

According to Statista, the software industry is broken down into application software, system infrastructure software, SaaS, operating systems, and database and analytics software.

When measuring the current industry, however, it’s usually done through more specific sectors, such as artificial intelligence (AI) and data. These sectors are also often intertwined, with cloud-based services using AI technology and business platforms being used to collect data.

One thing that is apparent though is that most, if not all, of these sectors are thriving.

Most leading software companies are names that have been around for ages, some even before the turn of the 21st century.

There are a couple of reasons for this. One being they had a hand creating the software industry that we see today. Innovation led by IBM, Apple, and Microsoft helped drive technology into the crucial asset it is now.

Second, once a brand is known it’s incredibly hard for other smaller companies to compete. According to Gartner, 78% of businesses prefer to work with brands they already know or have worked with. Essentially this creates an environment that favors and supports already leading brands and companies.

Plus, these companies often produce software for multiple sectors.

This creates the powerful tech giants that we see today and their impressive market performance.

Working in the Industry

If you work in the software industry, then some of these statistics should come as no surprise. With consumers favoring well-known and established brands, it makes sense that certain tools, programming languages, and platforms become industry staples.

Working in software, however, is changing drastically with the onslaught of online tech courses and the gig economy changing traditional learning and working methods.

Boost your programming skills with these Big O Notation courses

The software industry seriously falls short in terms of diversity and inclusion. Even with female figureheads in its history, women and minorities are continually unrepresented in the field.

However, efforts are being made to change this with dozens of non-profits working exclusively to make the software and technology industry more diverse as a whole.

We also argue that with the development of online learning and freelancing, people who previously didn’t have access to learning the necessary skills to work in the software industry now have the opportunity to do so, and we hope to see this boost diversity and inclusion.

It’s no secret that the tech industry boasts some of the highest-paying roles, comparable to that of traditional institutions like finance and business, with senior developers and managers earning upwards of $150k depending on their location and additional certifications.

On top of being a developer or engineer, understanding and using specific web frameworks and databases, like SQL or Node.js, can significantly increase your salary.

The pandemic also only helped this with IT salaries rising 3.6% in 2020, some states even seeing increases of up to 13.8% despite the pandemic. And the industry is forecasted to continue on this upward trend.

Overall, the job market for the tech industry continues to flow in workers’ favor, as the supply of developers and engineers fails to meet the demand of the workforce, increasing salary rates.

The Future Outlook of the Software Industry

You don’t have to be psychic to know that the software industry will hold just as much sway in the future as it does now. Potentially even more so with the insatiable demand to push boundaries and create new limits.

Product innovation aside though, everything is becoming increasingly more digital, with companies shifting workforces online and from home, relying on the daily use of software whether they work in the industry or not.

The market also shows nothing but positive growth as consumers and investors continue to invest in software developments because of how vital it is to our world.

However, we will say that for the software industry to continue this road of growth, new developments will need to stay client-focused, business-centered, and open to changes. Following this architecture will be crucial for the industry to stay on top.